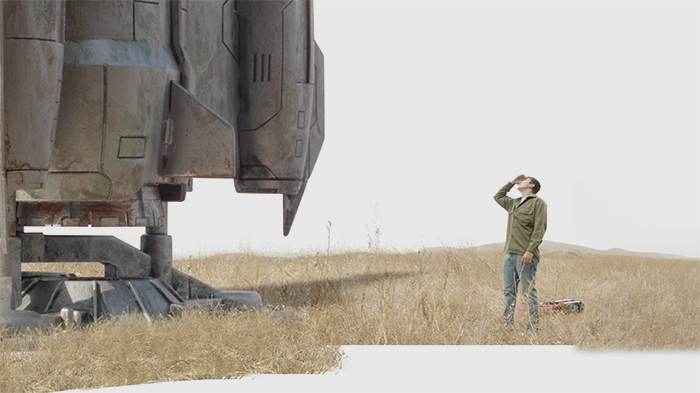 How Convolv Launched a Rocket for Chump Change

The democratization of VFX is now in full effect. Where once the creation of high-end visual effects took millions of dollars, hundreds of staff, and access to proprietary equipment, it now requires nothing but a laptop, a few free online tutorials, and a lot of imagination. Case in point: Convolv (a.k.a. Zach Zombek), a one-man effects house whose Vimeo Staff Pick AWAY is a tour de force of visual manipulation.

In the film’s climactic scene, a towering rocket launches into space, comes apart, and then arcs its way back to earth. It’s a stunning moment. Best of all, Zach had no idea what he was doing. “I tell people that 90 percent of what I know about visual effects came from making this movie,” he told us. “When I started, I knew pretty much nothing. I learned as I went.”

We asked Zach to break down the scene, his process, and the lessons he learned.

FS: So, starting from scratch, how do you create a realistic-looking rocket launch?

Zach Zombek: To be honest, when I first started working on this sequence, I had no idea. But the entire idea for the film came from this image I had of a man on a really high cliff overlooking the ocean, and behind him there’s a rocket ship. So I knew I had to figure it out somehow. Basically it took months of R&D, failed experiments, and a lot of learning to figure out ways to accomplish this. I ended up using a lot of practical effects, starting with the rocket ship itself.

I had two rocket models. The first one I painted myself, and it turned out horribly. So I built another rocket and had this one painted by a professional miniature-painting company. Once I had the rocket, I wanted to figure out a way to do all the shots very dynamically. For example, I wanted to figure out a way for the rocket to spin without anything being attached to it, which took a really long time, believe it or not.

How did you work that out?

I got a hot needle, poked a hole through the nose of the rocket, and let it cool off until the needle was attached. Then I attached the needle to a string, and that’s how I ended up getting the rocket to spin without anything interfering with the shot.

My setup was in a couple rooms of my house. I started off using Home Depot lights, but that didn’t work very well. I tried to use them to light the bottom of the rocket where the flames would be, but it ended up melting the bottom of the model. I had to do some really gnarly repairs. So then I decided to just use sunlight and LEDs since the heat… well, now I knew the heat could melt the ship. Most of the scenes ended up being shot with natural sunlight through the window. Then I used a blue screen because there are a lot of green elements on the model. I strung the model from a mic stand, and I shot it with my Panasonic GH3.

For the shots when the camera seems attached to the rocket, I hollowed out one of those foam roller things and attached the rocket to that so it would seem like the camera was mounted to the ship. I just went outside and spun it in the sun. I did a lot of weird stuff like that.

So all the background elements I added in post. I got the clouds from a few different places. I went storm chasing in Arizona and got a bunch of cloud assets from that. I went to Alaska to see the Northern Lights, and on the flight I captured a bunch of clouds. There was this one area that looked like the stratosphere, which is what I used for the wide shot with the rockets going above the mountains and stuff. That’s all Alaska. Basically all the above-the-cloud assets I got from that flight.

What about the other elements, like the fire and particles?

The particles are a mixture of smoke bombs we set off. We bought smoke grenades because I was trying to find a way to do this without having to do particle simulations in 3D software. So I set off smoke bombs, and that became the exhaust coming out of the rocket, all that billowy smoke. I built the fire elements in After Effects. Then the boca overlays, where the moisture is moving across the screen, that was me filming a pane of glass, putting water on it, and then using a leaf blower to blow the water particles off the glass.

When the ship is taking off, there’s some grass in the foreground.

That ended up being generated digitally, but I did a lot of R&D where I tried to shoot grass on a blue screen. I tried shooting grass when it was sunset and the background is completely black and the grass is really bright. I tried to create a matte. But none of it worked at all. Grass is just so dynamic and it’s really thin. So I ended up creating it in After Effects using the puppet tool.

What software did you use for this?

I used After Effects for all the compositing. Photoshop for the background plates and stitching photos together. A program called Terragen, which is a world-building software, to build some of the atmospheric cloud elements. And then when the escape pod departs the rocket, that’s when I started using Cinema 4D. But I don’t remember the model I used for that. I think half of it was custom, and half of it was a bunch of different models put together. I think part of it is the Star Wars escape pod from A New Hope. And, another Easter egg, those seagulls you see in the wide shot when the rocket gets revealed? They’re actually dragons from Game of Thrones. It was pre-animated with wings and stuff, so I was like, “Oh, I’ll just use that.” They’re so small, you can’t tell.

How long did the sequence take to put together?

About six months total, but that’s because I spent a lot of time learning, doing R&D, doing tests, researching online. I tell people that 90 percent of what I know about visual effects came from making this movie. When I started, I knew pretty much nothing. I learned as I went.

What were the hard costs?

Zach: A rocket ship model and some smoke bombs.

Convolv is a Filmsupply contributor with beautiful footage from AWAY and more. You can license their footage for your own project here, and watch AWAY in it’s entirety here.

Thanks to everyone for joining in the conversation, and congrats to Aaron Gerhart and Levente Safrany for being our winners!

BSS | Breakfast Interrupted – Behind The Scenes

Doctor Strange (Behind the Scenes)

How to make a 2D animated web-series

The Problem With Tarzan

How To Get A Movie On iTunes, Netflix & Hulu by Jason Brubaker

Behind the Scenes: Waitrose ‘Coming Home’

“Pop-Up” – Behind The Scenes