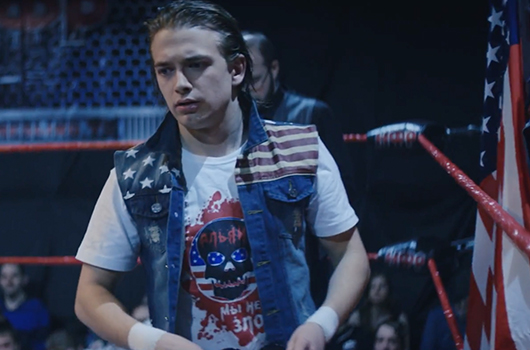 According to documentary filmmaker Taimi Arvidson’s website, she “does a lot of things to get the best story, including but not limited to: swimming with sharks, embedding in prison (a few of them), standing alarmingly close to rocket launches, chasing cowboys, and going barefoot in India.” An impressive rap sheet. One that could make you think she’s an adrenaline junkie. But that wouldn’t be entirely accurate. It’s not the risks themselves that Taimi is interested in — it’s what the risks reveal: the true character of her subjects.

“People show you who they are when they’re under pressure,” Taimi told us. “That’s my favorite part of the job: seeing what people are made of and who they really are underneath.”

In Taimi’s latest film, Make Them Believe (her first passion project and — we’re proud to say — the third installment of Filmsupply Presents), she follows her taste for danger into the weird fun-house world of underground wrestling in Russia. But, much like the risk-taking in her other work, the wrestling here is merely a McGuffin that gives way to big, gut-level themes like obsession, desire, and sacrificing for a dream. At its core, it’s a human story. But of course it would be: those are the only types of stories Taimi wants to tell. “I like to think of my work as a love affair with humanity,” she says.

Where did you find this story?

I’d seen a few photographs of this Russian underground wrestling ring, and it immediately spoke to me. I learned about Tim (the main character) later, but what initially drew me to the story is that it’s such a crazy thing. I like to tell stories about people who are in the crux of things. With these wrestlers, I saw guys who have this really big dream; but in reality, they’re wrestling in these shitty basements for just a few fans. It was fascinating to me that they’d go through such a struggle for no money and very little glory.

I took vacation time and we filmed the whole thing in six days. I was eager to do a project of my own with total creative control. So we got there and didn’t sleep for six days in order to get it all shot.

”When there’s real danger involved, either physically or mentally, people forget the camera is there.

Was it strange to make a film about wrestling? It’s almost like one layer of make-believe on top of another.

Well, that’s part of what was so fascinating about the subject matter. Wrestling blurs the lines between real and fake. There’s this big match in the film, and everybody already knows who is going to win. They’ve practiced the moves. The ending has been worked out. But they’re all so nervous still. It ends up feeling like a real sporting event, but that’s a trick. They are living inside a fake moment that becomes real. So we played around with that a lot. There is this jarring effect in the film when the viewers experience very real moments of injury or nerves among the fantasy moments of the wrestling.

I think the wrestlers themselves deal with that difficulty of distinguishing between what is real and what is fantasy. Take Ivan. While I was filming him, I couldn’t understand what about him was real and what was performance. The minute we got there, he was shit-talking Tim. He was saying all this crazy stuff to the camera. I started thinking every part of this fight was real for Ivan. But then suddenly he’d be very sweet. I didn’t know what to believe. The line between fantasy and reality had blurred for him.

What do you look for in a story? What does it require for you to pursue it and develop it?

Stakes. I look for a character who has stakes. Something has to be on the line. That’s the biggest thing for me. Finding someone in the crux of something. I like being there when someone is experiencing the biggest moment in their life. So with a film like Make Them Believe, I wasn’t excited about the wrestling. I know nothing about wrestling, and I’m not that into sports. But on a personal level, I connected to what Tim was going through and what the stakes were for him.

Do you go out looking for these stories, or do stories find you?

Oh no, they don’t find me. You have to search for them. You have to do a lot of your own research. It’s like speed dating. You get on the phone with people and find out their stories. Then it comes down to a certain amount of intuition. Do I have a sense of this person? Can I connect with them? Can I fully understand them and bring out the best parts of them — or the darkest parts, maybe, depending on the story?

What kinds of questions do you ask people to find out?

Very personal ones. You have dig into the emotional stuff, which not everyone feels comfortable talking about. I’ve filmed in prisons and documented scientists on a glacier, and the question is always the same: How does this make you feel? That’s when you learn what someone is all about, what they’re going through, and what this means to them. Their humanity is the part people will connect with. I look for stories that people can watch and easily be like, “I see myself in that.” Make Them Believe is set in Russia; it’s about a guy who doesn’t speak very good English and who is passionate about this very niche, obscure wrestling ring; but I still think people can connect with it on a personal level.

Are you a rule follower?

I don’t think rules matter very much. My job is to push the limits of the rules. If you want to make documentaries, you have to push the limits. Never accept “no.” You’ve got to constantly try, try, try — even if that means breaking the rules. I tend to be single-minded when I’m telling a story.

Your bio says you swim with sharks, embed in prisons, and stand alarmingly close to rocket launches. Is danger an important part of storytelling for you?

It definitely is. Documentary filmmaking is the highest high there is. When you’re with someone who’s going through something — sharing the biggest moment of their life with them — that’s the very best thing in the world. And it just so happens that those moments are usually dangerous. It’s useful, actually. When there’s real danger involved, either physically or mentally, people forget the camera is there. They become their most interesting and their truest self. I love filming that stuff.

People show you who they are when they’re under pressure. That’s my favorite part of the job: seeing what people are made of and who they really are underneath. I like to think of my work as a love affair with humanity.

License Footage From ‘Make Them Believe’

Behind the Scenes – The Godfather: The Game [Making of]

The Legend of Tarzan (Behind The Scenes)

The Legend of Tarzan (Behind The Scenes)

On the set of the movie “FOOTLOOSE” – Making Of

Tipping Point 2015 – Behind the Scenes

A Script So Good The Only Question Is, How Much Will It Sell For? by Corey Mandell

Real Steel (Behind The Scenes)